Those cakes in the trunk.

The narrow lane off Wellesley Road towards the Wellington side which was called the Turnbull Lane, and till 1935 as Turner Street is now known as Nawab Abdur Rahman Street. The mongrel potpourri of Wellesley carries in itself the whole romance of the splendid decaying charm of Calcutta. It is this place, near Ripon Lane where I remember spotting a licensed shop selling opium, fondly recollect an Anglo Indian home where I picked up a HMV box gramophone (model 113) – the owner with his brilliant blue eyes and a lovable puppy and discovered a dry cleaner on a corner where the tram lines bend - proclaiming something akin to ‘I live to die. I dye to live’.

There is nothing remarkable about the narrow alley of Nawab Abdur Rahman Street, except that it leads to the Saldanha’s.

On both sides, as you walk, you would find the series of those gracious, old houses with crumbling façade, discoloured signboards and a layer of poverty stricken neglect that is so sadly typical of this area of Calcutta, well, like so many other. As I looked around for that particular billboard and was about to ask for assistance that I saw a beggar sitting for alms, far from the luxury of warm bakery produce. With some shock, a sense of subtle guilt, but more with an air of overlook and enthusiasm I surged ahead to spot the name prominently inscribed in big bold letters on the German-buff coloured wall leading to a house.

It was relatively much cleaner and well kept than its neighboring houses and although an old house, the modern additions and a couple of parked sedans sort of testified the old enterprise doing brisk business in the present times. I felt happy to see the continuity. As I moved forward past a big hall on my right where workers were arranging for a cake-mixing in a giant tub, a welcoming, winding staircase revealed itself.

Denzil Saldanha’s enterprise is baking delicacies since the 1930s in Calcutta and is easily one of the few surviving family run businesses that command respect and a decent following in spite of zilch advertising of any kind. M X D Gama, another Goanese bakery closed down a few year back and I still remember the lingering taste of their cakes and pastry brought home by my father from Sir Stuart Hogg’s evergreen, old New Market on his way back from office.

The likes of these authentic bakeries are not abundant in the modern times where many flashy, air conditioned showrooms, steep prices, coupled with arrogance and over hyped existence largely serve subpar and insignificant produce, except for freakish exceptions, that are hard to find or afford.

I ascended up the staircase and entered into the house that can best be summed up in one word as cluttered. Given a second choice, I would say – chaotic.

‘I have had not placed any orders, but do you have anything to offer at this point? – I enquired with a lady whom I discovered later as being the domestic help. ‘Please take a seat’ – I was shown a comfortable sofa with velvet upholstery, following by her calling someone inside mistakenly stating ‘the customer’ has come to pick up the delivery. I corrected that I was not ‘the customer’ but certainly is one of the similar breed.

The room looked familiar to me as I had seen many of such high ceiling, elegant old Calcutta homes that tend to immediately take one to a time journey from the pigmied present to the gracious past. The table and the floors were stacked with white card board boxes and there was a huge, tin trunk which I half guessed to be full of fresh produce! Lovely Easter Eggs, cakes, bottles of vanilla, essence, chocolate powder, cans of flour and a aroma of fresh bake make you feel at home with the Saldanha’s and an assurance that you are in for big time gastronomic indulgence.

A lady came in and greeted me with a lovely smile. I declared again I am not ‘the customer’ she might be expecting and that it is completely an unsolicited visit of me without a pre-order, hoping to pick up whatever is available, if any. A little preamble and prelude also established my acquaintance and introduction with Saldanha’s through the delicious, spongy Lemon drop cake that I enjoyed at the Loreto House along with the crispy cheese sticks andcoffee – all of which were distinctly different and remarkably classy.
‘We are all Loreto educated’ - she smiled. ‘Our business runs by goodwill and by the word of mouth’ – she continued. ‘In the old times the salesmen would carry the cakes in black trunks sporting the word ‘Saldanha’s’ and they would be home delivered’.

As I chose to pick up the Lemon Drops, a pound of walnut cake and the cheese sticks, the lady insisted I also try the Brownies. ‘It is not too sweet and very soft inside. We make it with imported dark chocolate’ – she advertised. ‘The Easter eggs you see are being packed for orders from the United Kingdom and Australia’.

‘Would you like these Almond Slices?…few left…they have been made to order and are not regular produce’.

As I returned back to my car, contented with the success of the discovery and the reassuring taste of the deliciously soft and creamy lemon drop on the way, I impulsively stashed the empty box of it in a pile of garbage on the street – so very unlikely of me with civic sense. Did anyone see me – I wondered in embarrassment.

The old man was still sitting there. I was almost sure he had not been fortunate to have a single benevolent passer-by all these while when I was romancing with excess in choosing my pick of the bakery delights for snacks, dinner and breakfast.

I hope there will be another chance for me to introduce him to the taste of Saldanha’s. 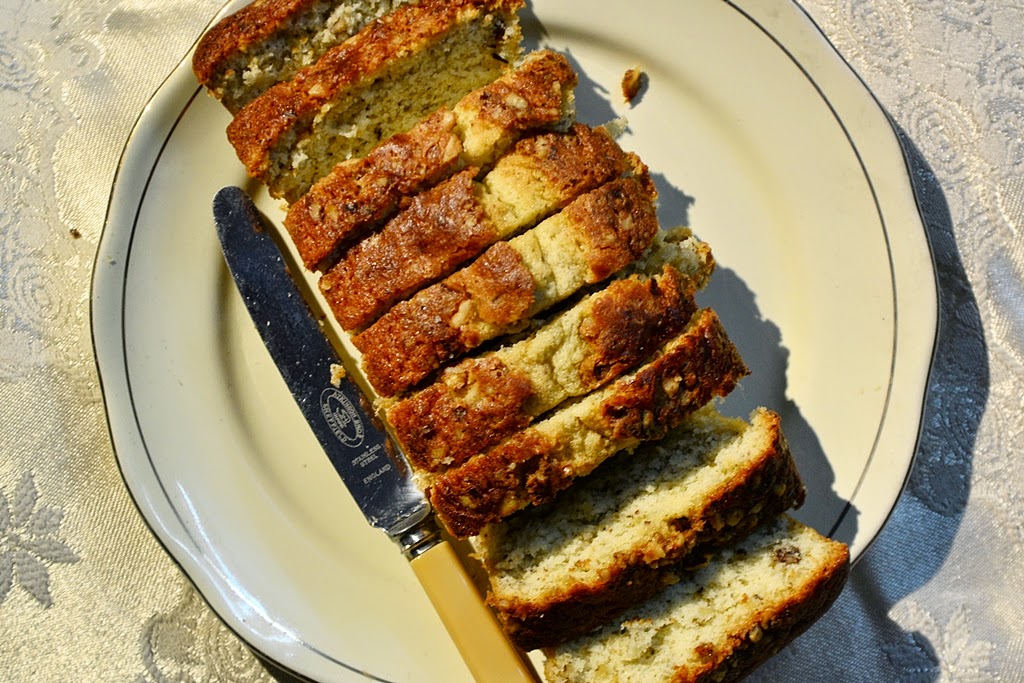 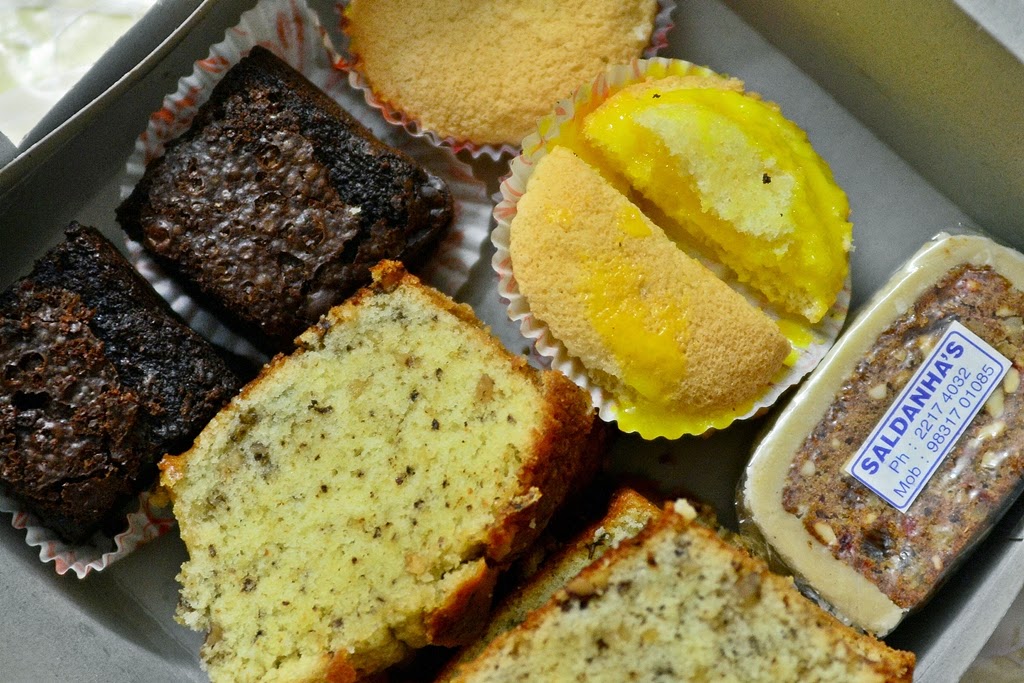 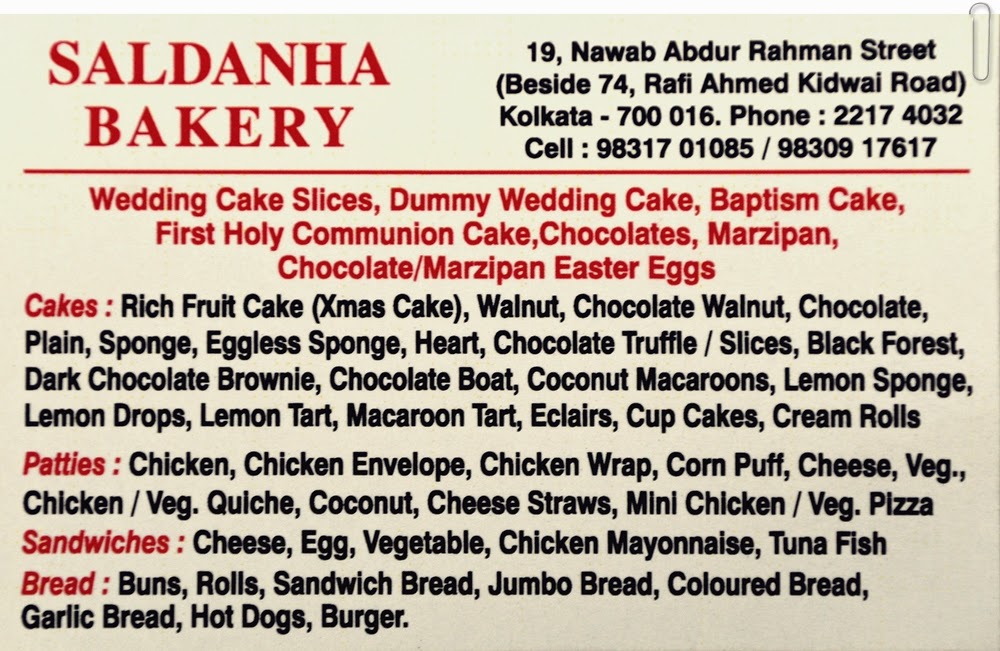